This site, placed to the south of Terralba's current urban area (Oristano's province), and close to the modern channel of the river Mògoro, was excavated and studied in 2007 and 2009. A little more than 1000 m2 were excavated, and after removing the superficial levels it was possible to verify that the site was heavily damaged by modern agricultural works; underground structures and some chunk of pavement are what remained: however, the archaeological material was very abundant.

Among the preserved structures there are several trenches of the foundation walls, but it is not possible to reconstruct the plan of the farm as a whole. Nevertheless it is worth noting the finding of two wells, a pit with amphorae and a few basins. The wells have oval form and both are similarly constructed, a double face of unequal construction. There is no well mouth, apparently, but the widening of one of the walls on the west side might be interpreted as a possible attached structure, a bench or a watering hole for farm animals. One cannot reject the possibility that it was a water wheel.

Three amphorae preserved in a pit excavated in the sand, without any structure, had been cut for the half and the bottom part fixed vertically. Possibly, it is a question of a storeroom for food conservation, as examples found in Sardinia (S'Imbalconadu) and Ibiza (Can Corda).

Finally, the recovered basins turn out to be fundamental in understanding the activities of the farm at least in the last phase of its existence. It is possible to record two vats of rectangular floor, with similar dimensions (1,34 x 0,90 x 50 and 1,43 x 0,93 x 50 m).

This type of structure is frequent in diverse western Mediterranean places, especially in the Iberian peninsula. They are identified as elements of a press, and in our case the production of wine has been confirmed by the presence of grape seeds and the finding of two small bronze billhooks to work the grapevine. Farthermore, an interesting analysis carried out at the University of Birmingham on the plaster of the basins validated our postulation.

The set of recovered materials allows us to date the local occupation from the beginning of the 4th century BC, and the abandonment around 200-175 BC. 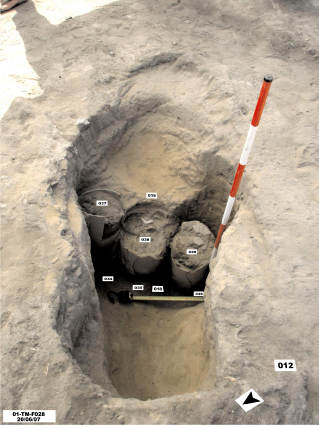