The chronology of the numismatic findings recorded in Terralba territory extends to almost 8 centuries. The most ancient coins go back to the 4th century B.C., and the most modern to the 4th century A.D. The sample includes coins minted during the pre-Roman, the Republican and Imperial periods, with quantities diminishing progressively until the 4th century AD. The Punic period is the most important, both as regards the Terralba territory and the island as a whole, since the sample could probably represent 20%of the total Punic stray findsthat until now have been published coming from the entire Island.

The present study assembles diverse materials found in a total of 143 archaeological sites, including the recent findings of Truncu 'e Molas and Pauli Stincus excavations (Terralba, Oristano), discovered during the campaigns of 2005-2007, and those that have been published by R. Zucca (1987: 142-143).

The coins we have studied amount to a total of 396 specimens but excluding the pieces of doubtful classification and poor preservation, the final catalogue consists of 376 coins.

The findspots have been identified as Punic farms, necropolis and Roman villae.

What is striking of this compilation, is that, despite the considerable volume of recorded coins, a notable homogeneity of types regarding the pre-Roman phase is attested. The most remarkable information from this initial period (ca. 350-238 BC) is that the recorded coins come entirely from Punic mints (Carthago?, Sicilia?, Cerdeña). More than 60 % of the catalogued findings were struck during the period ca. 350-238 BC, that is to say the century before the conversion of Sardinia into Roman province. A total of 215 specimens classified in 7 types.

The rarity of Greek coins in the money supply of Sardinia is well known as seen from in the summary published by Giberti (1991) in which none of the 129 pieces collected comes from west central Sardinia (Polosa p. 123, most of them were found in big port areas).

This information emphasizes the notable availability of the money supply in the Terralba area during this phase. This abundance of coins, for a period that most probable  included the first century of Roman domination, reflects an abundant use of currency in the countryside and a uniform spread throughout the territory, related to the density of farms.

The percentage of coin finds diminishes during the Republican and Imperial periods, especially regarding the 3rd and 4th centuries AD, when the monetary production reached a huge volume and coins were very present in all archaeological sites that were occupied during these centuries. The sample does not quite reach 40 %, in spite of the fact that it corresponds to a period of time that spreads during a greater number of centuries, from the 2nd century BC to the 4th A.D.

The reduction of findings in rural areas of coins struck during the Roman Imperial period is more important that the one attested during the Republican period. The sample of Republican coinage amounts to 20 % of the total, a little higher than the 15 % that the Imperials represent, which shows that during the first centuries of Roman domain substantial changes were not introduced in the structure of occupation of the territory and that these settlements continued enjoying activity.

In fact, van Dommelen has pointed out that in all rural areas where Punic-style rural settlements were recorded, basically no changes had been detected until the 1st century BC. In most cases, the majority of sites continued to be occupied well into the Imperial period (van Dommelen 2008: 172).

The difference noted during the Imperial period probably must be related to a change in the model of territorial occupation, for example the loss of importance or abandonment of these settlements, which could be more significant in the 3rd and 4th centuries, when the number of coin finds issued during these years diminished slightly more. This gives the impression that the rural territory had in the last centuries of the Imperial period a minor number of settlements, probably due to the land concentration.

In comparison with all these series, the Provincial minting of the island is of minor significance, since we have only recorded one well-preserved specimen and another of doubtful attribution. 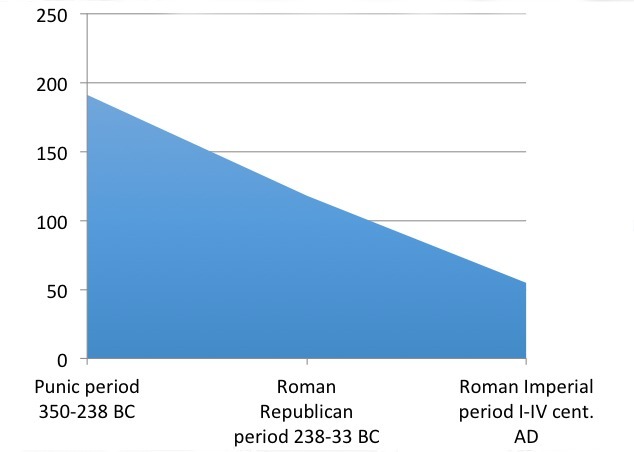